The Flat style has longevity.

Flat is one of four styles that are strong, simple, and great for icons or logos.

The graphic styles are similar, but there are crucial differences. And these can make one style much better for certain things than the other(s).

Unlike Icon, Flat has no outlines. There are just shapes making up a picture, so it’s simpler. Sometimes flat looks a lot like Paper from the FUN styles. But whereas Paper has dimension, Flat is, well… flat. Flat design is a huge trend now internationally and still shows no signs of dying anytime soon. It’s easy to read, I guess, and people have so little time… we seek simplicity. Still, there are a few indications that mixed media is the next big thing, but still incorporating a lot of flat design.

I’ve also added texture now, though, in a new development of this style which evolved from a book illustration, eventually to show up in yoga cards. Some of the illustrations from the yoga cards are featured above. 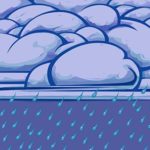 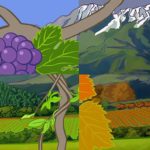 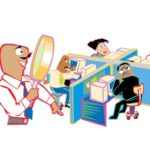 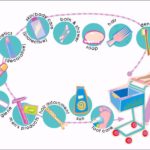 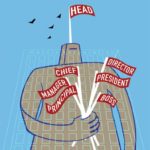 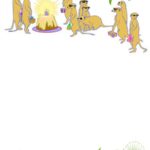 Icon is one of four styles that are simple and strong.

Ideal for logos and illustrations of aboriginal African folk tales needing simple forms with abstract shapes and an emphasis on texture, this group of styles also includes Legend, Scraperboard and Flat.

As mentioned on those pages as well, it’s similar to Flat, in that it has flat shapes. Like Cut-out, it has thick lines surrounding it, like Legend. But the difference is the colour of the thick outlines.

Icon is (surprise, surprise) very suitable for use in logos or for presenting information graphically, as in the weather icons shown here, or the larger weather pictures. Children and adults find these images easy to absorb and assimilate a lot of info in a very short time.

Also a good style for cartoons with broader appeal than only kids.

‘Legend’ is often used for African folk tales since it brings out the mythical quality of these ancient stories.

Legend belongs to the graphic family which also includes other geometric, hard-edged styles like icon,  scraperboard and flat.

Legend has the same sort of outlines as Icon but the images are usually black. This stays true to the tribal work which inspired this style. I often use it for fantasy stories and African folk tales in schoolbooks. Sometimes I emboss it like leather, as in some of the samples shown here. (I know… very Nineties.) As you will see, this style conveys an African flavour without the viewer necessarily knowing anything about the tribal art which inspired it. It is one of the two styles unique to me (so far!), the other being Fotomelt.

So – Scraperboard and Legend are good generally to convey an African flavour. One can add as much or as little detail as the story needs. Sometimes these two styles meld. Generally though, Scraperboard has more texture within the shapes themselves.

Scraperboard, like ‘Legend’, is good for conveying an ethnic or handmade feel.

With Scraperboard though, there tends to be more detail. Sometimes these two styles meld.

Generally, though, Scraperboard also has more texture within the shapes themselves. This leads to it looking far livelier than Legend, which tends to be more graphic and useful for icons with its lack of detail.

Scraperboard is a digital style, and I don’t offer the hand-scraped linocut or woodcut style.